Lorenzo Massart, "in Tuscany Sangiovese must be made!" [VIDEO]

"It will be all right", the emotional video of Dynamo Camp [VIDEO]

The video made with the staff and children of the center of excellence located in the Pistoia mountains, has as its soundtrack the song by the singer-songwriter Nesli - "Andrà Tutto Bene"
Read More
NEWS

Pitti sledges in September, Taste in 2021

The invitation of the regional councilor for agriculture
Read More
NEWS

Covid-19, over one hundred thousand euros donated to the "Santa Maria Annunziata" hospital

Every year on the estate of Poggiotondo in Subbiano (AR) we celebrate the magic moment of the harvest, Cinzia and Lorenzo open their company to enthusiasts, gastronomists and journalists interested in knowing where their wines are born.

"Very often people make wine for friends" - he says Lorenzo Massart, Poggiotondo Agricultural Company - "I did not do it for my friends, I did it to show that I am the biggest producer of wine in the world"

He defines himself as a fundamentalist of the Sangiovese, a lawyer, painter and pure blood wine-grower, he has built his personal paradise in Subbiano in the Casentino valley.

"It's a place where you feel my soul" - continues Lorenzo - "I started making 25 / 30 wine years ago, my dad was a farmer who then became a university professor, but the genius of the family is me"

His life partner has the elegant smile of a woman from the Veneto, artist and doctor Cinzia takes great care to underline its rural origins.

"We met many years ago on vacation" - he says Cinzia Chiarion - "My parents had a farm, the first thing Lorenzo told me: can I come to your house to see your tractors? I remember coming and the first thing he did went to see my father's tractors. This is to say how crazy it is, how it remained so. "

From these vineyards are born 3 wines, Poggiotondo is certainly Lorenzo's favorite son, rough but sincere, he ages in cement tanks and never sees wood.

"I believe that in Tuscany we do not have to mimic the French" - he continues Lorenzo - "but you must make Sangiovese. The difficult in recent years was not making wine and sending it to the United States. The hard part is making wine and going to bring it to my area, one of the most difficult in the world. " 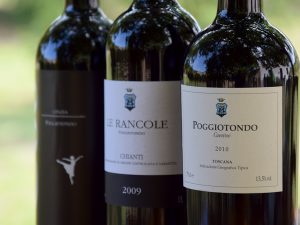 The Rancole, historical company brand, matures for 40% in small wooden barrels and refines in bottles at least 12 months.

"I have taken so many slaps in these years. The Casentino Sommeliers considered me a pain in the ass, and today they are my admirers. "

Il C66 It is the brainchild of Cinzia 90% Sangiovese 10% Merlot and one year in wood, soft and enveloping, a wine of a woman for women.

"Your Lorenzo wines are not very suitable for women" - he points out Cinzia - "I'm a bit 'too rough, I would like to make a wine a little' softer. A wine made by a woman for women, and so was born on C66. "

Cinzia e Lorenzo every year they celebrate the magic moment of the harvest opening their company to enthusiasts, gastronomes and journalists interested in knowing where their wines are born.

In this valley the commitment of Cinzia e Lorenzo is to produce wine of the highest quality, respecting the nature, biodiversity and the native values ​​of their vineyards.

After Bagno a Ripoli even in the Chianti masks at home

The mayors of the Municipalities of Chianti: "each aid contains a protective device to be used outside the home to avoid contact and try to minimize the possibility of contagion"
Read More
NEWS

"It will be all right", the emotional video of Dynamo Camp [VIDEO]

The video made with the staff and children of the center of excellence located in the Pistoia mountains, has as its soundtrack the song by the singer-songwriter Nesli - "Andrà Tutto Bene"
Read More
NEWS

Covid-19, the messages of the mayors of the Metropolitan City of Florence [VIDEO]

Milko Chillerihttps://www.rossorubino.tv/author/milko-chilleri/
Journalist and VideoReporter, my first companions video and music, mixed to the certainty that the sound and the image can talk to everyone.

Culture and music in Montesenario