Skip to content
Cordon Bleu School, show cooking on the Cooks of 800 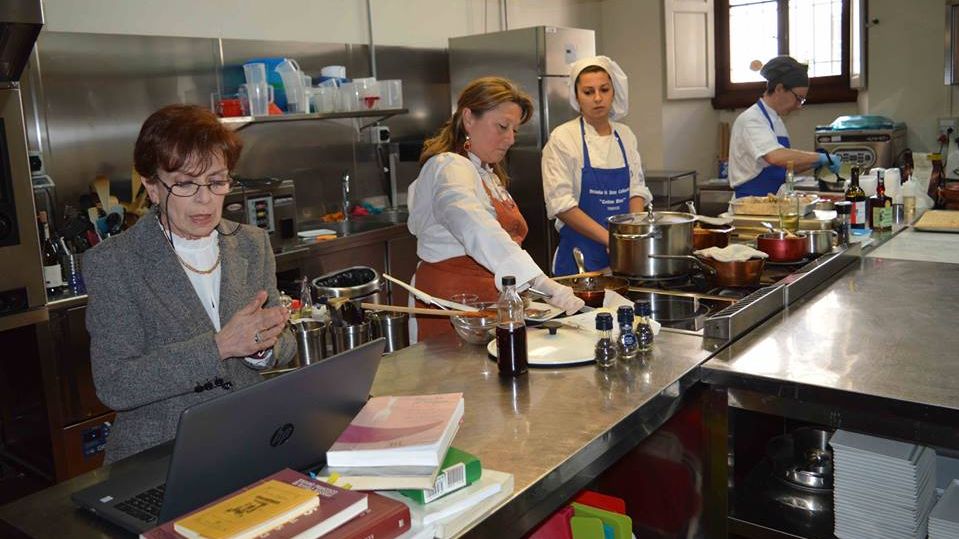 Saturday 5 October at 17, at the headquarters of School of Culinary Art "Cordon Bleu" (via Giuseppe Giusti, 7), the lesson will be held - event entitled "Le Cuciniere d'Italia of 800, recipes for a professional female kitchen“, With which the academy also joins the Festival this year The heritage of women, where it is cooking show is inserted in the OFF calendar.

Il cost of the lesson is from 40 euro, to register follow the procedure on site of the Cordon Bleu (viewable at the link Enrollment in the women's legacy course: 1- choose a course; 2- contact the secretariat at 055 2345468, 055 2260228; 3- complete the contact form on the website; 4- pay the deposit agreed with the secretariat). 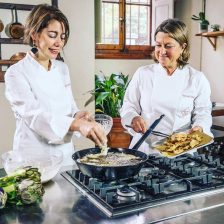 Preceded by a historical introduction to the dishes by Anna Maria Evangelista, Professor of History of Cuisine, the demonstration cooking lesson conducted by the founders of the School, Cristina Blasi and Gabriella Mari, includes a tasting of dishes from the original cookbooks "Le cuciniere" of the various regions of Italy, a real plunge into the past to discover the rich culinary tradition of our country, which the contribution of stubborn and modern women has made it possible to reach us.

It dates back to the mid-nineteenth century The true Genoese cooker, the Cuciniera Bolognese, the Piedmontese Cuciniera, titles of some small volumes released just a few years apart, focusing on the figure of the cook, the cook who in the past worked mainly within religious communities, hospitals or convents and which in the nineteenth century became a more evolved woman, with increasingly specific tasks, losing the connotation of simple scullery. Destined for families and no longer for the cooks of the great noble families, which is why we will always talk about economic cooking or family cooking, these books were often the work of anonymous male authors who hid behind a female pseudonym.

The poor dress emphasizes their destination to the kitchen environment where they would have been wasted and then thrown away when rendered unusable. With the release of the first edition of Pellegrino Artusi in the 1891, these small works will be condemned to oblivion, having no more reason to exist, and this shows their extreme rarity.

The event, conceived for the second edition of theWomen's legacy, an event dedicated to the fundamental contribution of female figures to culture in its various forms, offers the opportunity to appreciate the ever decisive contribution of the female universe to the world of culinary science.

The "Cordon Bleu", Born 34 years ago in Florence thanks to the intuition and passion of Gabriella Mari and Cristina Blasi, with the intention of combining tradition with innovation in culinary science, it is a prime example. And it is also the most concrete response to the recent controversy, the expression of an unjustified male-dominated skepticism, of which the chef Gianfranco Vissani is the spokesman, who would like to relegate women to the margins of the kitchen area where he would reserve the only field of pastry because they would heavy and more decorative than a restaurant kitchen.

Anna Evangelista after graduating from the School of Archival and Paleography in Florence, she graduated in History of Theater and Performing Arts. For a long time he worked on archive sources, dealing with parties, banquets and shows between the sixteenth and seventeenth centuries. In the wake of a strong passion for cooking, he began studying ancient Italian cookbooks and in 1992 he published the text of Giovanni del Turco, datable to the early years of 1600, a cookbook of Tuscan cuisine, with which he won the Antico award Factor in the 1993.
Between the 1996 and the 1997 he held a series of columns for the "Green Line" transmission, modernizing recipes from ancient recipe books; At the table with the King, published by Polistampa in the 1999, is the title of the publication that came out at the end of this collaboration.

From the 2013 he teaches at the “Cordon Bleu” at the Bachelor in Italian Culinary Art, where he teaches courses on the history of nutrition, history of Italian cuisine and history of Tuscan cuisine, creating recipes extracted from texts from the Middle Ages with the boys of the academic program nineteenth century.

La School of Culinary Art "Cordon Bleu”Is located in Panciatichi Ximenes Palace, a prestigious Renaissance building in the heart of the historic center. Besides being equipped with kitchens with the latest tools and equipment, it is equipped with classrooms and a specialized library. Over the years, the involvement of chefs and experts in the international sector has made this haute cuisine school one of the most recognized on the Italian scene. His proposal, which includes amateur and professional courses, monographic workshops as well as team building for companies, is open to everyone, from housewives to young boys, from managers to foreigners, to those who approach the kitchen by passion or to make it a profession . Aroma Italia, a taste dip in Italian gastronomic culture that aims to convey to the fans of this technical world, tricks and secrets for a good execution of traditional Italian recipes and more.

With October, in addition to starting the new academic year of the European Bachelor's Degree in Italian Cuisine, the first academic culinary course in Italy, post-diploma, recognized by the European Accreditation Board Eabhes (European Accreditation Board of Higher Education School) which entitles the Bachelor's degree issued by Eabhes, inaugurated in 2013, will also start the new Master in Culinary Arts and Sciences, recognized by the Ministry of Education, which aims to train professionals specialized in the food sector and provide skills to spend in effective way in the world of work. The Master, with which "Cordon Bleu" enriches its vast range of training proposals, is organized in collaboration with the IUL Telematic University of Studies. The course lasts two years and gives the opportunity to make concrete experiences in training internships at facilities affiliated with the "Cordon Bleu" School. A unique path for all students that develops in two different ways, in relation to the entry qualification, with the achievement at the end of:

I level Master. For those who are in possession of a three-year degree, at the end of
activity will be awarded second level degree.

Certificate of participation in the High Training course for graduate students.

Florence, meeting with the Palatine Electric